Skip to content
For a full look at our report, visit our Storify page.

From its commencement in 2008 until now, the Brooklyn Bridge Park and Brooklyn Pier have been through many adjustments, whether that be through businesses or construction. Brooklyn citizens have had some interesting opinions about these changes. Some weren’t even aware of the changes going on around them.

Brooklyn Bridge Park is the 85 acre, 1.3 mile long space stretching from the Manhattan Bridge, all the way down to Atlantic Avenue. The Brooklyn Bridge Park Development Corporation was founded in 2002, when Mayor Bloomberg and Governor Pataki began funding the project. Two years later, the architectural firm of Michael Van Valkenburgh Associates was hired to form this new space. The master plan was released in 2005, and construction finally commenced in February of 2008. Only two years later, in 2010, Piers 1 and 6 were opened to the public. Today, 6 piers in total are open. But according to brooklynbridgepark.org, the space will only be 65% complete by the end of this year. 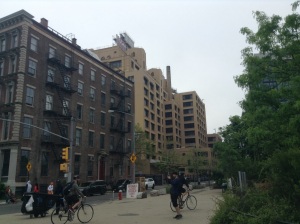 Celeste Joy, 46, a Brooklyn citizen for three years, was having a birthday party for her kid in the park. “It’s a lovely space, but I’m heartbroken about the high-rises. It’s destroyed the view from Brooklyn Heights. When I walk down the hill to Dumbo, the view is just completely destroyed.” However, she remains positive about the changes. “I guess it’s a net positive that we have all this great public space now.”

Other Brooklyn citizens also like to come to enjoy the outdoors, like John Smith, age 24, who was playing in the athletic courts at Pier 2. He is at Pier 2, “almost everyday. Playing basketball, sightseeing, go to some different spots. I just like the overall feel, especially since it’s been warmer out lately.”

Even long-term Brooklyn citizens haven’t noticed any changes. “Being from Brooklyn, honestly for a certain point in time, I had no idea that this even existed. When I first started coming here, it was just this bridge portion where you could just see the city. Then they added different things, and just more gentrification of the area is just making it a better place,” Smith says, and adds, “It’s definitely calm, peaceful, and somewhere I like being.”

The area is reported to be very homely. “It brings a lot of people from foreign countries and domestic as well; it’s really a home feeling. It’s actually a big place for Brooklyn.” Alex Bckord, an employee of one year at Lizzmonade says. He goes on to say, “A lot of people know what we are trying to do and support us…and we feel welcome.” 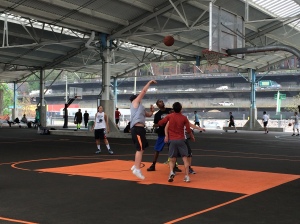 Teacher Samantha Jones compared businesses and buildings from when she was a kid to now. “I think a lot has changed, but I am more keen to it now…I see how things have changed…from generation to generation and our perception. It’s more diverse in terms of different neighborhoods like Bush Wick, Fort Green, and Brownsville, like, gentrification is the new ‘it’ thing. The Brooklyn Bridge Park which is now here, that I don’t recall when I was younger.”

For a photo gallery of the Brooklyn Bridge Park, click here.

In the southern portion of the park, and in between Piers 4 and 5, Pier 5 marina is planned to be developed by Edgewater Resources. Their plan calls for 125 slips on four floating docks, and includes a group boating program. This marina will continue Brooklyn Bridge Park’s set goal of encouraging recreational boating and on-water education. It will give New Yorkers additional opportunities to have a connection with the waterfront.

See What the Buzz is About